Hamlin Fistula UK was founded in 1968 by Harold Burnett to support the work of the Addis Ababa Fistula Hospital. When Howard passed away his wife invited my brother, Clive, to take on the work. As he was about to retire as a senior partner in a leading firm of chartered accountants, he was delighted to take on the role.

After getting to know the excellent work of the Hamlin’s in Ethiopia, I became a trustee in 2007 and Chairman in 2009 a post that I retired from in 2019.

During my time with Hamlin Fistula UK my wife and I got to know Catherine extremely well both in Ethiopia and during her visits to the U.K.

Catherine showed her love for Ethiopia and for those, worldwide, supporting her. There are very few people who can light up a room just by entering it, and by so doing encouraging them in their efforts to support her – Catherine was one of those.

Catherine will be remembered, along with Reg, for her role in almost eliminating Fistula in Ethiopia and to have done so in her lifetime. She has demonstrated skills and personal characteristics that the rest of us can only admire. Love, compassion, skill as a surgeon, a determination to get things done and by so doing, improve the health and well being of her beloved patients.

Catherine was the supreme optimist. For it is the optimist, who against all the of the cynics, improves and changes the world and increases the sum of human happiness.

That was the quintessential Catherine.

This Small Charities Week we are celebrating the BIG impact made by so many small charities across the UK and around the world! Hamlin Fistula… 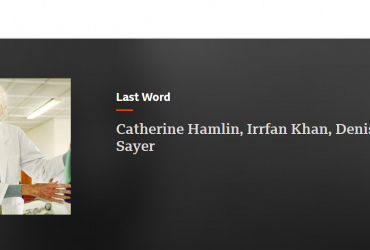 A message for our Knitters – Covid-19

Because of the global Covid-19 health emergency we are not able to access our UK office as frequently as we would like. Can I ask you to…